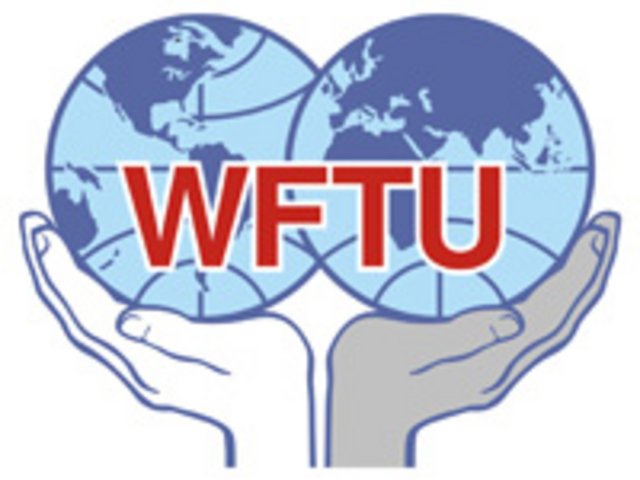 On behalf of the European Regional Office of the World Federation of Trade Unions (WFTU), I convey the solidarity of the class-based Trade Union movement to the Italian working people, for their militant mobilizations against the neo liberal policies attack the working people.

We support your strike for: Defending jobs and national contracts and for the release of public service national contracts; against the precariousness and the relocation of production facilities; against the attempt to impose Marchionne’s model and spreading it all over the world of work, for a fixed income for all, for the protection of wages and pensions, for the protection of common goods, for the right to housing and the control of tariffs;  for a fairer tax, that charges the taxes to the evaders and reduces the tax burden on employees and on the most vulnerable of the population;  for defending the school, the university, the public research, against the Gemini’s reform; for the right to knowledge, for the general legalization of all immigrants and for sharp break of the link between residence permit and employment contract, for the democracy in the workplace and for a law on union representation.

We support the mobilizations of the elderly people against the plans of the government to reduce their pension rights.  We express our support towards women workers who are participating in a militant way in the mass strikes of the various sectors of the economy.

The attack by the government on the social insurance system is part of the plans drawn up by the ruling circles of the European Union and the conservative governments Socialist and Social democracy Governments who want the working people and the low-income strata of the people to pay the consequences of the world economic crisis.

We should not forget that the neo-liberal conservative and all the other forces have the increase of the profits of businesses and the further maximization of profit of capital and the multinational companies as their priorities.

Now is the time for the working people through their concrete actions to unite their forces so that they can combat these policies.  The demand of the class-based trade union movement and the working glass is the increase in jobs, the preservation and improvement of the living standards of working people, immigrants and the elderly, as well as the reduction of the pension able age.

The imperative need is that through targeted and coordinated struggles the contemporary needs of the working people should be highlighted.  For us it is clear that the rich must pay for the world economic crisis and not the working people.